From the Catechism Of The Council Of Trent: The Creed: Article 1

What Does it mean to Believe?

“I Believe” “The word believe does not here mean to think, to suppose, lo be of opinion; but, as the Sacred Scriptures teach, it expresses the deepest conviction, by which the mind gives a firm and unhesitating assent to God revealing His mysterious truths. As far, therefore, as regards use of the word here, he who firmly and without hesitation is convinced of anything is said to believe.”

From the Catechism Of The Council Of Trent: The Creed: Introduction

“Faith” “In preparing and instructing men in the teachings of Christ the Lord, the Fathers began by explaining the meaning of faith. Following their example, we have thought it well to treat first what pertains to that virtue.

Though the word faith has a variety of meanings in the Sacred Scriptures, we here speak only of that faith by which we yield our entire assent to whatever has been divinely revealed.”

“Necessity Of Faith” “That faith thus understood is necessary to salvation no man can reasonably doubt, particularly since it is written: Without faith it is impossible to please God. For as the end proposed to man as his ultimate happiness is far above the reach of human understanding, it was therefore necessary that it should be made known to him by God. This knowledge, however, is nothing else than faith, by which we yield our unhesitating assent to whatever the authority of our Holy Mother the Church teaches us to have been revealed by God; for the faithful cannot doubt those things of which God, who is truth itself, is the author. Hence we see the great difference that exists between this faith which we give to God and that which we yield to the writers of human history.”

“Unity Of Faith” “Faith differs in degree; for we read in Scripture these words: O thou of little faith, why didst thou doubt; and Great is thy faith; and Increase our faith. It also differs in dignity, for we read: Faith without works is dead; and, Faith that worketh by charity. But although faith is so comprehensive, it is yet the same in kind, and the full force of its definition applies equally to all its varieties. How fruitful it is and how great are the advantages we may derive from it we shall point out when explaining the Articles of the Creed.”

The Office Of The Papacy from Our Lord Jesus Christ in the Gospel of Saint Matthew 16:16-20: 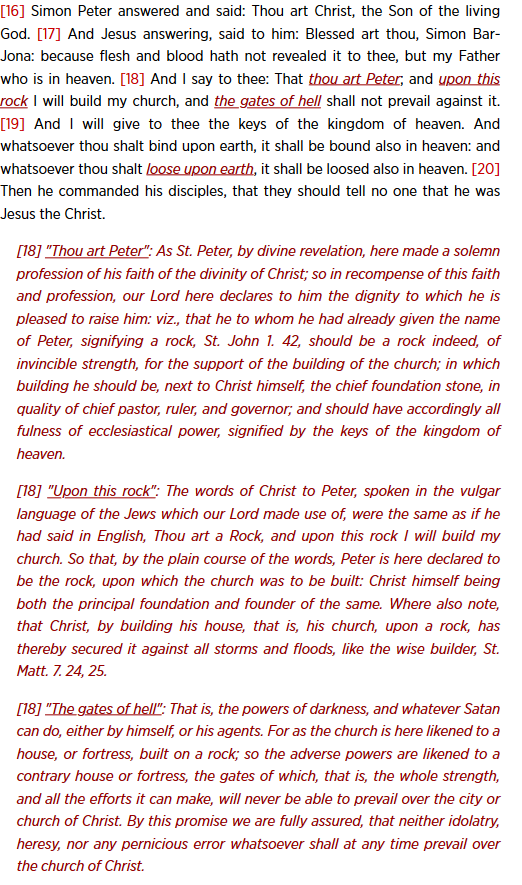 A report on the White House Petition To President Trump To Protect The Elderly, including Pope Benedict XVI, will be released in a few hours, Rome Time, but released early on our blog, and a handful of Catholics liked, shared, retweeted said petition, but not one actually did their own post on it, on their own news site, Youtube Channel, etc.  But what is more surprising, the faith and love of our Pope Emeritus among the Protestants who actually left comments wanting him to be safe.

What does that say to you Catholics, small “c” Catholics, that Protestants have more love for our beloved Pope Benedict to leave well wishing comments on the Youtube Video and Post on the White House Petition?

Even though still Pope, but retired, does he not deserve protection from any mistreatment from the horrible liberal, socialist Gay Mafia members in the Vatican?

He is the same age as His Holiness Pope Leo XIII, 93 years old and his mind and everything is still there to write that amazing book with Robert Cardinal Sarah on the Priesthood.  The confirmations of Archbishop Carolo Maria Vigano deserves to be heard and taken serious of any kind of abuse that Pope Emeritus is receiving and be taken away from the evil men and women in the Vatican to a place of peace and security!

I tell you, my fellow Catholics, wake up, smell the coffee and restore your belief and faith in the Papacy and what Our Lord gave the Church!